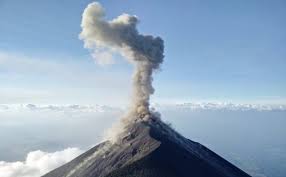 East Bali’s Mount Agung is yet to quieten down completely, with two volcanic eruptions recorded yesterday morning (Sun, March, 17) at 8am and 10:30am respectively.

According to local reports, both eruptions were accompanied by ash columns as high as 500-600 meters, though there have been no accounts of ash rain.

Two days earlier, on the evening of Fri, March 15, a similar volcanic flare-up had caused four nearby villages—Ban, Sukadana, West Tianyar and East Tianyar in Karangasem—to be exposed to ash rain.

Despite Agung’s rumblings, the Panca Wali Krama — a rare series of ceremonies that occurs once every ten years — has continued as planned at Besakih Temple on the southern foothills of the volcano.

At about five to six kilometers from the volcano’s crater, the Hindu temple complex sits at what is considered safely outside of Agung’s danger zone—set currently at a radius of four kilometers from the crater by Indonesia’s volcanology center (PVMBG).

Talking to Bali Post, Aji Ngurah Putu, the secretary of ceremony, confirmed that even though the two eruptions had occurred, they did not affect the progress of the ritual, which is intended to rebalance the island’s natural environment.

The alert status of Bali’s highest peak remains at Level III aka standby, the second highest of the four levels, and, as such, hiking up Agung is still not permitted.

In addition, the PVMBC have urged communities living around rivers upstream of the volcano to stay alert as to the potential secondary threat of rain lava flows.